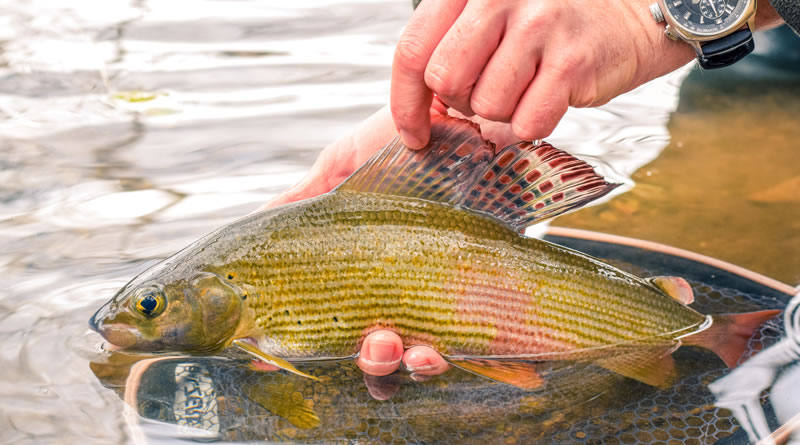 May 16 is a unique holiday for many fly fishermen, as the grayling season begins in Slovenia at that time. There are already many different groups of insects along and in the water, temperatures are rising and grayling is very active after spawning in the early spring months. This time we are writing about five groups of artificial flies that we prefer to use for grayling fishing, as they are very successful.

Grayling may not grow very large, but they are picky. Larger specimens are difficult to catch, so fishermen appreciate them and love to fish. In Slovenia, grayling fishing is allowed only with an artificial fly tied on a barbless hook. Occasionally grayling also grabs some other types of baits. Fishermen often catch them while coarse fishing for whitefish, and in rare cases they also grab a small metal lure or other smaller types of artificial lures.

In fact, all types of CDC flies will be good, they just need to be small enough and the right colors. Fratnik’s fly is much loved by the world’s fly fishing fans because of its efficiency and ease to tie. Its author is a Slovenian, Marjan Fratnik, so we can be especially proud of it. With it, he fished grayling and trout in his native Soča area in NW Slovenia, and elsewhere. In the Slovene-speaking world, the fly is known as Fratnikova puhovka (F-fly).

Spinners and duns are very efficient, especially in grey-blue colors (e.g. BWO or similar). Grey flies of this kind also imitate mosquitos, and black-ones follow the shapes of ants. The possibilities are wide and limited only by the fisherman’s imagination.

Its author, Frank Sawyer, fished trout with it, but the hungry grayling will not refuse it as well.

If we decide to fish with a nymph at greater depths or in a stronger current, where the fly must sink quickly and reach a certain depth, we will often prefer to reach for the hare’s ear rather than a pheasant tail. This classic nymph, similar to Sawyer’s pheasant tail, mimics many aquatic insects in the larval stage.

Gammarus nymphs are most often tied in light brown tones, and the olive color is also extremely successful.

What are your favorite grayling flies? Write in a comment below.