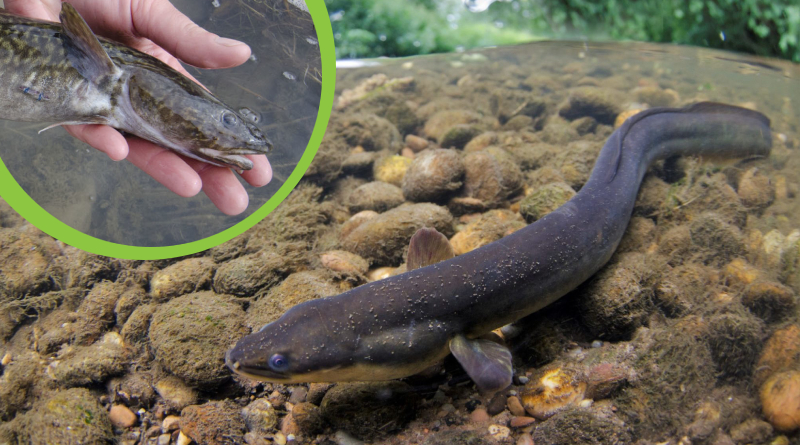 There are about 25 freshwater species of fish in Slovenia, which are also interesting for sport fishing. Some of them are quite common, such as carp, rainbow trout or pike, which inhabit many areas from the east to the west of the country. But what kind of species are among the more exotic ones who don’t find themselves on the hook very often?

In addition to freshwater fish, which are often caught by sport fishermen, some other fish species also live in running and still waters across Slovenia. For some of them, fishing is allowed, others are protected by law. Even though they are definitely worth mentioning.

These snake-shaped fish have a slimy and seemingly bare body. Many powerful teeth are hidden in the large mouth, testifying to their predatory nature. They grow up to a maximum of 2 m, mostly up to 90 cm. They are considered extinct in Slovenia, and their historical distribution was in Rizana, Vipava, the lower section of the Soca and the Drava. Individual catches are known from Ljubljanica, Gameljščica, Kolpa and Mura. Eel blood is toxic. It is worth mentioning that this is a fully protected fish species and its targeted fishing is prohibited.

This native species from the sturgeon family has such a characteristic body shape that it is difficult to confuse it with any other freshwater fish living in Slovenia. It has a distinctive pointed muzzle with two pairs of fringed mustaches, a long torso with special shields, and an elongated tail. It grows up to 60 cm in length. It is rare in our country, in fact it has never been very common. It can theoretically be caught in the Sava River near Ljubljana, near Krško, in the lower Kolpa River, in the Mura and the Drava.

The sterlets and their close relatives are more common in the private fishing districts of some Central European countries, especially in Hungary and the Czech Republic. There, the specimens also reach more than 1 m in length and weigh up to 15 kg (extremely large specimens up to 100 kg!). This makes them one of the more interesting target fish for sport fishermen. Fishermen fish them with powerful carp or catfish tackle, using the carp hooks with bait on the hair. Usually, these are boilies or pellets with meat flavor. Sterlet is fully protected in Slovenia, so the target fishing is forbidden.

One of the most interesting freshwater specimens whose fishing is still permitted is definitely burbot. It is a codfish that is more common in the Northern Hemisphere. It inhabits parts of Lake Bohinj, the upper basin of the Ljubljanica River (Cerknica Lake, Unica), and we can also catch it in the Mura. Burbot also historically inhabited the Ljubljanica River, the Sava River, the Krka River, the Drava River and sections of the Sotla, Kolpa and some other smaller rivers.

At first glance, it is a bit like catfish as it is a ground fish. It grows from 20 to 60 cm, exceptionally more. Every burbot over 50 cm is considered a trophy catch nowadays. It has an elongated snake-shaped body, the scales are tiny and the general color is brown to olive green. The skin is often decorated with a marbled pattern. The head is flat, the jaws strong. There is an odd mustache on the front of the lower jaw. It has two dorsal fins.

Burbot loves cold water, so we have to fish him there as well. He mostly feeds at night, so successful fishing is almost exclusively in the evening (at dusk). Earthworms or other food of animal origin are the best bait. It is an extremely interesting fish species and a great challenge for any sport fisherman.